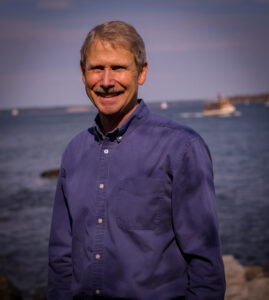 Rev. Richard Ochsner (Ric) has served as Senior Pastor of First Baptist Church, Yarmouth, Maine since 1990. He grew up in the Finger Lakes Region of New York State but truly loves Southern Maine where he and his family have lived since 1984 when he became associate pastor of South Gorham Baptist Church in Gorham. He and his wife Karen (“K.D.”) have two grown sons, Nathan (wife Bridgitte with their 2 sons), and Andrew (Living To L.A.S.T.), all of whom share in his passion for Jesus Christ and ministry of the Gospel however or wherever they find themselves.

Although occasionally attending church as a youth, Ric found himself spiritually more comfortable outdoors than in a church building with “organized religion.” In 1974 when in a state of disillusionment and hunger for purpose in his life, he went to live for six months with relatives who were medical missionaries in Zaire (Congo). It was there in the African bush, at 21 years of age, that true faith and true fellowship in Christ became real as he watched it actively lived out in real community. And it was there that he felt the beginnings of his call to pastoral ministry. Ric graduated from SUNY Cortland with a B.S. in Psychology in 1977, and Gordon-Conwell Theological Seminary with a Master of Divinity in 1983. K.D. is a 1981 graduate of Gordon College with a B.S. in Sociology, marrying Ric in 1982. 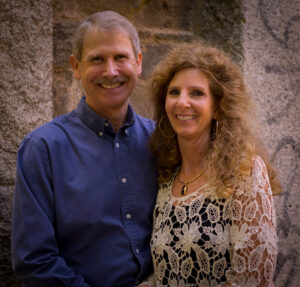 Ric enjoys getting out in nature with his wife KD to exercise, hike trails or sit along the coast to meditate and pray, drawing from the likes of Henri Nouwen, Adele Calhoun or Eugene Peterson to enrich his own practice of spiritual formation. He loves music, has a passion for whole-hearted worship with Kingdom minded people. Ric has been actively involved in minister’s groups in the Greater Portland Area since 1984, encouraging deepening relationships with ministry leaders across denominational lines.

Responding to a growing call to mentor other pastors soul-to-soul, he has served with Vision New England as Director of Pastoral Mentoring, Northern New England since 2011. In April 2016, after 25 years as Senior Pastor at First Baptist Church of Yarmouth, Maine he left the pastorate to engage fully in MAST Mentorship, of which he is founder.

However, after concerning and increasingly degrading symptoms in 2017, Ric was diagnosed with PML, an often fatal disease. However, he has been graciously brought through, and continues ministry through M.A.S.T. Mentorship. In spite of his ongoing disability, Ric desires to be used by God for His glory at every opportunity.

At the heart for Ric, is a deep desire to help people connect with the Living Lord in a real, down-to-earth way. The search to personally know more of Jesus Christ and to follow him, is a spiritual journey he travels to this day. He passionately invites others to join him in this endeavor, with the intention of passing on what has been learned to the generations that follow.

In summation Ric is:

Passionate about the Kingdom of God – borderless & advancing

Progressive in methodology, conservative in theology, traditional in ecclesiology